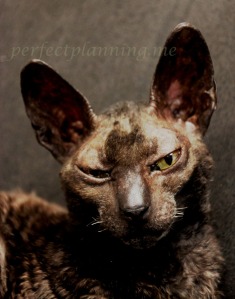 This is my parent’s Black Cornish Rex, who could have been an internet meme sensation. Her name is Anna Rexia, also affectionately (insomuch as one would use the word affection in reference to this cat,) called by “Rexi”. She was mysteriously unaccompanied when she was taken in by my cousin and his co-workers, who spotted her outside their Fire Rescue Station. The captain declared her unfit for EMT duty, perhaps due to lack of certification, or maybe it was her complete disregard for the human race. So, my cousin took her to Mom and Dad’s just around the corner, where she found her forever home.

Rexi was always excrutiatingly thin, with piercing green eyes and huge ears. The incessant writhing, yes writhing, of her long tail in addition to her enormous ears inspired me to frequently describe her as “a snake attached to a bat”. Her brown-black coat was very short, but soft and dense. If you can imagine the feel of a plush toy gutted and spread over a bare skeleton you can get the idea of her body under the gentle stroke of your hand.

Her coat and body composition made her sensitive to cold, heat and light. Although she craved warm spots, she could actually get sunburn in direct sunlight. She abhorred dampness or chilly evenings.

Rexi’s sensitivities were manifested in quirky habits and particular tastes. She had the unnerving insistence that she knew you were knowledgeable of her peculiarities and, thus, you were obliged to accommodate them. This was something I learned when my family had the distinction of hosting Rexi for a couple months during a move. I frequently made the evening bedtime rounds under her green, glowering stare and incredulous protests until, at last, I positioned her personal heating pad and brought it to the correct temperature for her evening respite.

Anna Rexia was a much loved companion for my Mom and Dad for many years. She did actually curl up next to Mom while she read and worked crossword puzzles. They were sad to say goodbye when she passed on last month. I imagine this little character of a feline is irreplaceable, principally due to the $900 price tag on Cornish Rex kittens; and, perhaps because the perfect snake connected to a bat meme image is a rare find indeed

Posted by Perfect Planning | Filed under Made Me Laugh

One evening, at the end of a very long day, I was prevented from retiring to my dreamy, comfortable, down-covered bed by another rousing round of Helping a Teenager With Homework. I was losing my patience as the Teen in question was definitely not as focused as I thought he could be on finishing the assignment. In my frustration I raised my voice in exasperation, waved the book in emphasis and proclaimed: “If you are not going to put any effort into this, then there is no reason for me to be here! I don’t need to be doing this, I got an ‘A’ in stupid…”. Suddenly my mind became aware that if I finished the sentence I would inadvertently degrade the subject of my son’s study. I couldn’t be guilty of demeaning the value of a class, so instead, I stopped short. My son took this to be a delightfully revealing exchange, however. Now, whenever I am exerting my opinion regarding family issues he counsels the rest of my family: “Hey! We should all listen to what Mom says; after all, she did get an ‘A’ in Stupid.

In an earlier life, the Orange Cat fell and dangled by a toe caught in a pool screen until he twisted his leg into a nasty break. Here he is after surgery to insert a rod in his leg.

You may have read previously about my same Orange cat, the most accident-prone feline in the world. He came into my son’s room this morning as I was waking my son. The cat jumped onto the windowsill, as is his custom, so as to pace and generally badger Tyler for attention. When my son finally swung his legs over the edge of the bed to get up, the cat gave a quick flick of his tail and jumped down from the windowsill to the floor. Except that the tail had, beyond probability, in that one flick, created a slip knot in the cord of the window blinds. Which cord tightened with even greater improbability around the last, maybe inch and a half, of his tail. So, as he launched off the sill, his great orange fluffy overweight body was recoiled back towards the wall and suspended about two feet off the ground, head down, legs flailing and his entire weight held in air by about an inch of tail. Yes, this actually occurred right before our eyes. The angry howling and pitiful flailing prevented photography of this National Geographic moment, but I think you get the picture. No worries, the slight sacrifice of much of the flesh on my forearms and Tyler’s quick maneuvering was all that was needed to recover the mad, slashing feline from his predicament. He lives to almost die another way…

Voyager encounters the outer boundary of the Solar System. The small bright dot represents our Sun

Voyager is now an Interstellar Spacecraft! I was one of many Florida kids touched by humankind’s amazing journey to space by virtue of our proximity to the NASA’s Kennedy Space Center. My father was a supplier of high pressure systems to many of the programs at NASA and his insider knowledge and personal stories fueled my geeky fascination with space science. I was 13 years old when Voyager 1 and Voyager 2 were launched in 1977 and hurled toward the outer limits of our galaxy. Their mission even captured the imagination of science fiction writers, who made a Star Trek movie based on the possibilities of Voyager’s seemingly infinite journey of interstellar travel. This week, almost 40 years after launch and with a Star Trek twist of humor, NASA scientists announced that they could be sure that Voyager 1 has traveled beyond the reach of our Sun’s solar winds and out into the interstellar space of our Milky Way galaxy. I know there are so many petty, small and shallow things to which the newsmakers and the media culture want to draw your attention today. But take a moment to be transported to the mysteries of the universe, enjoy the creativity inspired by the tremendous achievements of mankind. See more of this incredible story Here

I am thinking about the effort exerted to organize a life: keep the household in order, manage the appointments, correspond with my circle of influence, create the meals, take photos and videos like crazy, setting goals and reaching them. Why exert so much energy and dedicate so much time if I do not know why I am doing so? Crystalizing the reasons behind my daily life – that is the focus part of living.

Pausing to note the emotion, capturing a memory, having a conversation, enjoying a meal together – these are the celebrations of living.

So many people exhaust themselves to live the lives they think they should be living. They see a friend, a TV personality or someone in a magazine article doing all these seemingly impactful, impressive and popular things and they feel like they must strive to be that person, living life like that. Just because something is of value, or a positive activity, doesn’t mean it is something we have to strive to include on our priority list.

That is why it is useful for me to reflect on the reasons behind my daily efforts.

Then I can make decisions easier and focus on being intentional as I carry out everyday tasks.

The Perfect Plan is to Celebrate what happens each day. It may be a day that falls neatly into our intended arrangements, or it may tumble into something completely different, very fulfilling and worthy of noting.

What in your life is….